On March 15th, the nominations for this very strange year’s Oscars ceremony were announced, with the three movies I profiled in Part 1 each snagging six nominations, including the all-important nomination for Best Picture.

In Part 2 of Watching the Oscar Contenders, I will highlight three films that also received multiple nominations this year and will each be fighting for Best Picture, Promising Young Woman, Judas and the Black Messiah, and Sound of Metal.

Way back in December 2019, the trailer for Promising Young Woman dropped and took the internet by storm. The clip opens on a visibly intoxicated woman struggling to stay awake in a bar, as a group of men comment on her, saying that she’s “putting herself in danger.” One of the men decides to take the woman home, as an unsettling and familiar scenario begins to play out for the audience. The woman struggles to stay awake throughout the car ride, they arrive to the man’s place, and he attempts to get the woman to have a drink. When the woman says she needs to lie down, the man joins her in bed and begins to make out with her, despite her asking “what are you doing?”

Then, the music drops out as the woman rises and clearly, soberly says “Hey. I said ‘what are you doing?'”

From that moment, I was hooked, and eagerly awaited the film’s April 2020 release. COVID-19 had other plans, and the film was pushed all the way to December, serendipitously being released among a number of other Oscar contenders, helping to elevate the film’s profile so much that it received five Oscar nominations, including Best Picture, Best Actress for Carey Mulligan (playing the aforementioned woman, Cassie), and a surprising Best Director nomination for Emerald Fennell, becoming one of only seven women ever to receive a nomination in that category. The film’s lighting-rod subject matter made it one of the most talked about films of the past year, and positioned it for a surprising and fruitful awards season run.

In Promising Young Woman, Cassie Thomas (Mulligan) is a medical school drop out still dealing with the trauma of her best friend Nina’s rape years earlier, which saw the perpetrator walk away with no consequences. Now, Cassie spends her nights acting drunk at bars and allowing men to take her to their homes and revealing her sobriety when they attempt to take advantage of her. While at work, she runs in to an old classmate, which sets in motion a plan to exact revenge on those she views as responsible for Nina’s rape and what followed.

Naturally, Promising Young Woman is not a film that will appeal to everyone, and many were mislead by its pulpy premise to think it was a dark comedy. It is not. The film is best described as a character study with the propulsive structure of a thriller. Fennell (who also wrote the screenplay) slowly reveals the circumstances of Nina’s rape to the audience, confirming details that most had already guessed. Campus sexual assault is a topic all too familiar, so many audience members are already making assumptions before they are laid out. Fennell is banking on that familiarity with the narrative of date rape and sexual assault, as she subverts audience expectations time and time again in the latter half of the film.

The film isn’t perfect. It is a challenge to walk a tonal tightrope like this, and that leads to some inconsistencies throughout, most of which can be easily excused as the handiwork of an inexperienced, but still incredibly talented, director. The screenplay also gets away with a few too-convenient plot developments, including the third act completely hinging on a semi-ridiculous twist.

Even with those flaws, the film is electric. Mulligan, in a rare contemporary-set film, knocks it out of the park. Cassie is a complex character, and it’s exciting to see Mulligan get mainstream praise for a character like this. Too often, films that deal with sensitive subject matters will provide the audience with a redeeming main character to center the story. Promising Young Woman does no such thing, allowing the audience to process their feelings about Cassie in real time as it presents a complicated portrait of a woman who has not, and is seemingly unwilling, to process her trauma.

Some understandably take issue with the film’s ending, which I won’t spoil here. To me, the ending fit with the story Fennell was telling, and in a more spoiler-y review I could go deeper into the shifting power dynamics of the film’s climax, but that is for another time.

Promising Young Woman is a movie that dares its audience to like it, and for the most part I did. Along with Mulligan’s amazing performance, the supporting cast is doing phenomenal work, stacked with numerous well-loved character actors playing with audience perception of them, including good-guys like Adam Brody, Bo Burnham, Max Greenfield, and Chris Lowell. It’s a film that takes some big swings, something that I certainly appreciated. Even if it doesn’t land every punch, it asks the audience to consider some big issues in a new way.

Judas and the Black Messiah

Comedian Ziwe Fumudoh had a recurring bit on her show “Baited” where she asked her white guests what they knew about certain Black civil rights figures, including Huey P. Newton, Angela Davis, and Fred Hampton. Most of the white guests had no clue who these figures were, illustrating the American education system’s failure to teach Black history, but also white people’s general ignorance towards many civil rights leaders.

The Trial of the Chicago 7 featured Fred Hampton in a minor role, but he takes center stage in Judas and the Black Messiah, a film that is part-biopic, part-docudrama, framing the critical years of Hampton’s life while leading the Illinois Black Panther Party through the point of view of his close confidant (and FBI informant) William O’Neal, who would eventually betray Hampton, leading to Hampton’s assassination by the FBI at the age of 21.

This film is all about the two performances of Daniel Kaluuya, playing Hampton, and Lakeith Stanfield, playing O’Neal. The two are ostensibly co-leads, so on Oscar nominations morning many were shocked to see both Kaluuya and Stanfield land in the Best Supporting Actor category, along with the film’s four other nominations. Most people had already agreed that Kaluuya campaigning in Supporting was category fraud, so Stanfield sliding into that category alongside him exacerbated those feelings.

Putting aside the category fraud, both Kaluuya and Stanfield are deserving of nominations, with Kaluuya a near odds-on favorite to win on Oscar night. The film rests on their shoulders, and though they are backed up by a great supporting cast, most of the narrative revolves around those two characters. This doesn’t totally work in the film’s favor. A film like this is ripe for a showcase supporting turn, but Judas doesn’t give any of its supporting characters much room to flesh out their own stories. Even the framing device of the narrative being told through O’Neal’s perspective can at times be a detriment to telling Hampton’s story. The screenwriters crammed so many details about those years into the screenplay that the pacing feels rushed throughout the movie, as we move from set piece to set piece at a staggering clip, rarely allowing for those small moments that can differentiate great biopics from standard ones.

Another minor issue I had was with the casting. Don’t get me wrong, each performer in this cast gives a solid-to-great performance, but by filling out the cast with actors in their late-20s, early-30s, the audience never gets to feel the impact of just how young all of these people really were. Hampton was 21 when he died, O’Neal just 20 when he sold Hampton out to the FBI. So much of what made these people so powerful was their youth, and that youth was also part of what scared the FBI about Hampton and the Black Panthers. Kaluuya is one of our best working actors, but even he cannot convincingly play a 21-year-old.

Despite the abundance of great performances, the pacing issues kept me from fully connecting with the film. I could not help but wonder if Hampton’s story would’ve been better served without framing it through O’Neal’s eyes. Expanding this story to a limited series would’ve also provided the opportunity to expand the supporting characters without sacrificing elements of the story. It was a film I was very excited for, but didn’t fully meet my expectations. 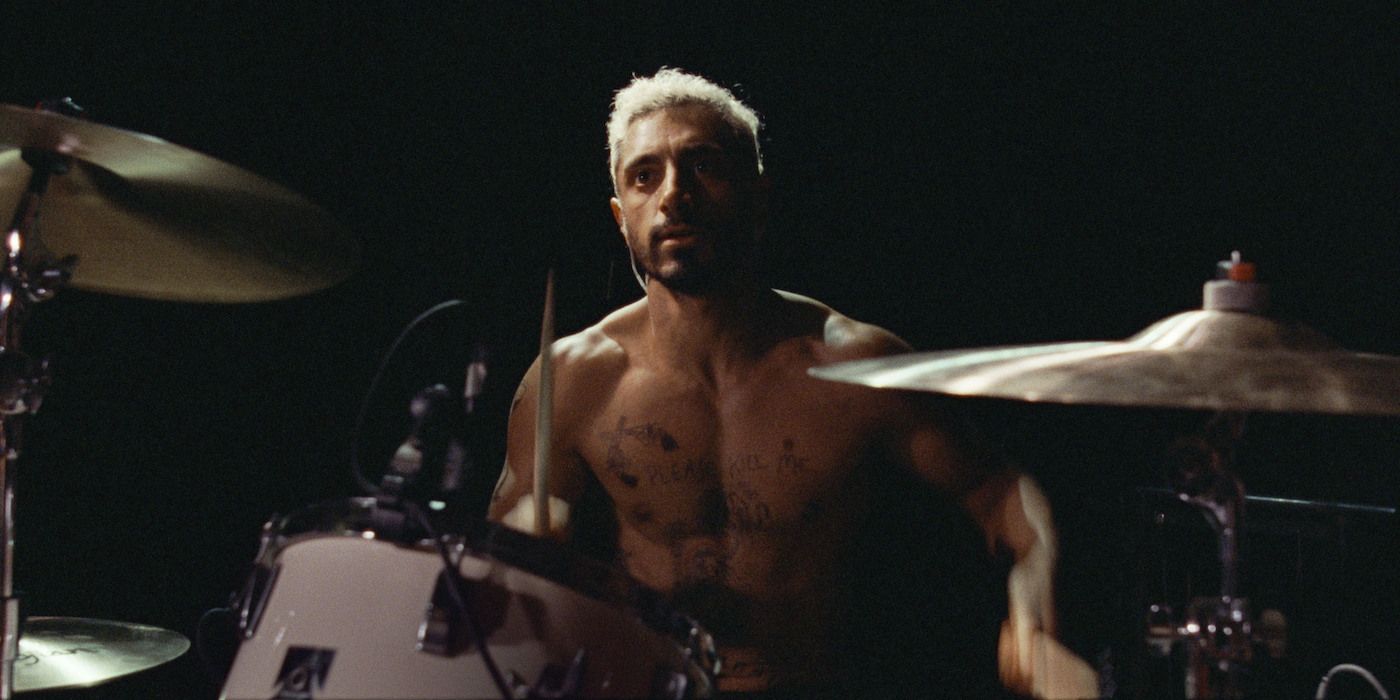 In Part 1 of this series, I found myself struggling to fully explain why I loved Minari, to distill the essence of what made it so good into words. I’ve always found it easier to articulate criticisms of film (even ones I love) as opposed to describing exactly what I loved so much about a film. After the past year of lockdown, Minari just gave me joy, and that makes for a short review. Well, I’m running into the same issue with Sound of Metal.

Sound of Metal tells the story of Ruben (Riz Ahmed), a drummer in a rock band whose sudden loss of hearing upends his life. Four years sober, Ruben goes to stay at a shelter for deaf recovering addicts with the hope that he will begin to process his hearing loss and become acclimated as a non-hearing person. He leaves behind his bandmate and girlfriend, Lou, with the promise that he will return to her, with his hearing, one way or another.

Sound of Metal is the little film that could, originally premiering to small praise at the Toronto Film Festival back in 2019. Fans of the film led the drumbeat for Ahmed to receive an Oscar nomination for his performance, but many considered it a longshot. After it debuted on Amazon Prime this past December, the film received wider praise, and was able to secure six Oscar nominations, including Best Picture, Best Actor for Ahmed, Best Supporting Actor for Paul Raci, and Best Sound for its unique employment of soundscapes to bring the audience into the world of a non-hearing person.

The film is fantastic. It’s emotional, but never sappy. As Ruben learns to sign, he becomes an important part of the non-hearing community at the shelter, and begins to see what a life without music could look like, even though he struggles to say goodbye to his passion. The film also introduces most hearing audiences to the debate around cochlear implants, (a device that bypasses the normal acoustic hearing process and can allow a deaf person to hear) a highly controversial device in the Deaf community. Ruben sees the cochlear implant as his salvation, his way back to music and to Lou. The counselor at the shelter, Joe (played by Oscar nominated Raci), works to help Ruben accept his deafness and to see the world beyond hearing. That tug-of-war is what drives the film’s plot forward, leading to an uncertain, but beautiful final scene.

It’s a powerful film, and a beautiful portrait of a Deaf community, and also a tender look at recovery. This film, along with Minari, are two of the best films I’ve seen over the past year, and I will be happy if either comes away with an Oscar or two in April.

I have just two Best Picture nominees remaining, David Fincher’s Mank, and Florian Zeller’s The Father, both of which will be profiled in Part 3.

View all posts by Andrew Pieterick